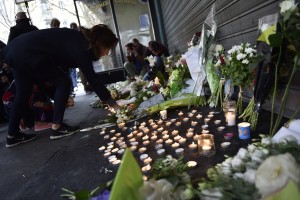 A woman lay flowers at the cafe ‘La Belle Equipe’, Rue de Charonne, in Paris on November 14, 2015, following a series of coordinated attacks in and around Paris late on November 13. At least 128 people were killed in the Paris attacks on the evening of November 13, with 180 people injured, 80 of them seriously, police sources told AFP. AFP PHOTO / LOIC VENANCE